Three drugs can all be used on their own if a patient can’t use metformin or other specific drugs and diet and exercise alone isn’t controlling their blood glucose levels.

About 3 million people in the UK have type 2 diabetes. Some 31,000 people may be eligible for the three recommended treatments: canagliflozin (Invokana), dapagliflozin (Forxiga) and empagliflozin (Jardiance).

Type 2 diabetes is long-term condition that has a serious impact on people who live with it, and the treatments given should be tailored for the individual.

Many people whose blood glucose levels aren’t controlled by diet and exercise alone, metformin is the first drug treatment they’ll be offered.  Some people may experience nausea and diarrhoea, and they may not be able to take it if they have kidney damage.

Others who can’t take a sulfonylurea or pioglitazone, then the three drugs recommended in this guidance can be considered.  This is as an alternative to the separate group of drugs called dipeptidyl peptidase-4 (DPP-4) inhibitors.  ….more 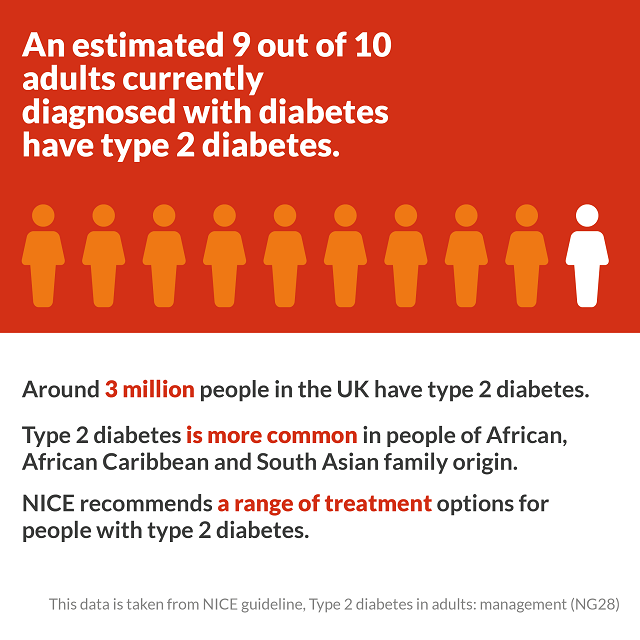 There are almost 3.5 million people who have been diagnosed with diabetes in the UK (Diabetes UK, Nov 2015). It is estimated that approx. 90% of adults currently diagnosed with diabetes have type 2 diabetes.
A person with type 2 diabetes has too much glucose (sugar) in their blood. This can either be because their body doesn’t produce enough insulin – the hormone which controls the amount of glucose in blood – or their body doesn’t use insulin effectively. If blood glucose levels are not managed effectively it causes tissue damage which can result in blindness, kidney failure, foot ulcers which can lead to amputation, and also premature heart disease, stroke and death.
Type 2 diabetes is more common in people of African, African Caribbean and South Asian family origin.

This site uses Akismet to reduce spam. Learn how your comment data is processed.